RSS
← Mr. Gorbachev: Tear Down this Wall!
The Pinnacle of Destruction: It’s All Uphill from Here →

The next area to demo was the framing on the second floor, including the bathroom on this floor. This is a “before” view of the small hallway at the top of the stairs, facing north (toward the front of the house). The door on the right (which may be the narrowest 5-panel wood door in existence) is the linen closet; the door in the middle leads to the guest room; the door on the left leads to the upstairs bath.

This is the bathroom before demo. One of the best features (the only good feature?) is the original skylight with bead board walls. This is one of the features we fell in love with when we bought the house in 2000.

Here’s the bathroom during demo. The radiator from the master bedroom is on the left – pretty much the only remaining element at this point.

The framing at back (but in the middle) is the old closet from the guest room (which was occupied by vents and the mechanical elements of the old Jacuzzi tub).

Faux closet door on the guest room side.

Looking through the closet door during demo, through the master bedroom, to the back of the house. 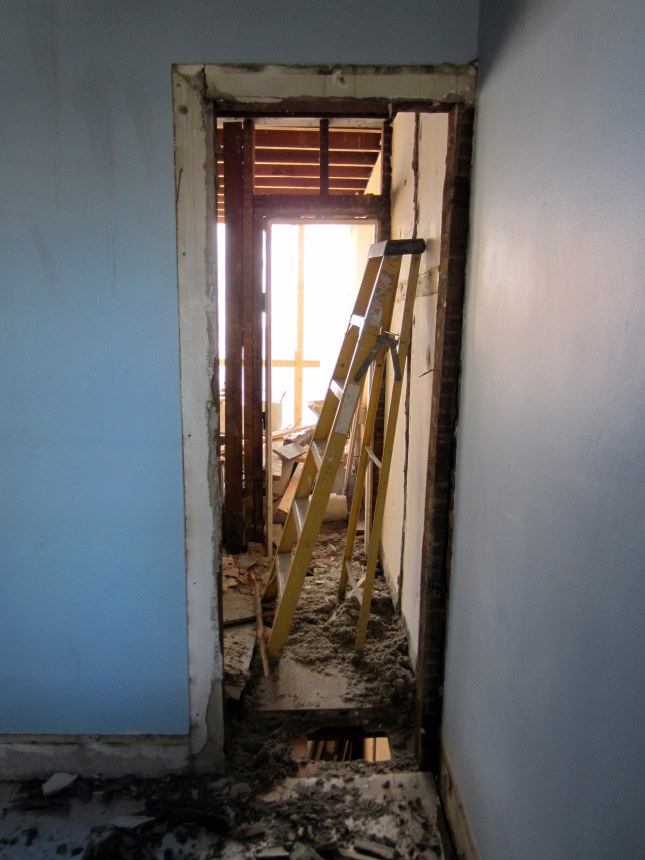 View to the back from the bathroom.

We are definitely retaining the skylight, but will be repairing the superstructure above the roof, and, in the process, making some adjustments to keep out the leaves. 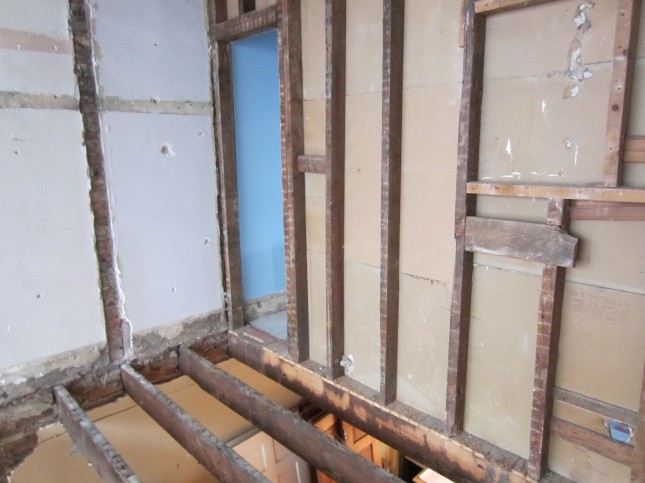 When the house was built, the second-floor bathroom was narrower, and the west wall ended before the brick party wall, leaving room for abutting closets for the two bedrooms. Over the decades, the closet space was usurped by the bathroom, but vestigial elements remain. In addition to the old closet door frames, this included the plaster patterns on the brick wall to the west – the bare brick between the plaster was where the interior closet walls were.

Exposed joists on the second floor. This used to be the first two thirds of the master bedroom (the rest of the bedroom floor dropped off the face of the earth with the demolition of the old sleeping porch).

Posted by Kevin on February 26, 2012 in Interior Demolition

← Mr. Gorbachev: Tear Down this Wall!
The Pinnacle of Destruction: It’s All Uphill from Here →