While the drywall elsewhere in the house was being primed and refined, preparations were underway in the two upstairs bathrooms for tiling that would commence the last week in May.

The master bath and guest bath both would use natural stone, and the original plan was to do the same oversize (8″ x 16″) brick pattern in both. The only difference would be the stone itself. The original tile design for the two bathrooms is shown below.

As we got closer to T-Day, and actual ceiling heights were established after drywall was installed, we revisited this design with our new architect. The refined version established a the following pattern, from floor to ceiling:

The updated master bathroom tile design is below:

The guest bathroom tile design features a dark stone floor (with 4″ base up the wall) and lighter wall tile:

Back in the master bath, backerboard has gone in as a tile substrate. The long drain system and Kerdi waterproofing system boxes are to the right, ready for deployment.

Backerboard has been installed on the shower walls, below. Note the step down from the bathroom floor to the shower floor. This was the result of the use of 2×8 framing under the showers, versus the 2×10 joists everywhere else. This supports the curbless shower approach – the drain will be at the bottom, but the tile will slope upward from the middle to the step on the left and to the same level on the right, against the wall.

Here, the Kerdi system and long, rectangular drain have been installed in the master bath:

The same has been done in the guest bath, but at this point, work has progressed further, and one of the several layers of waterproofing has been applied. It’s a very subtle color; you can hardly make it out. 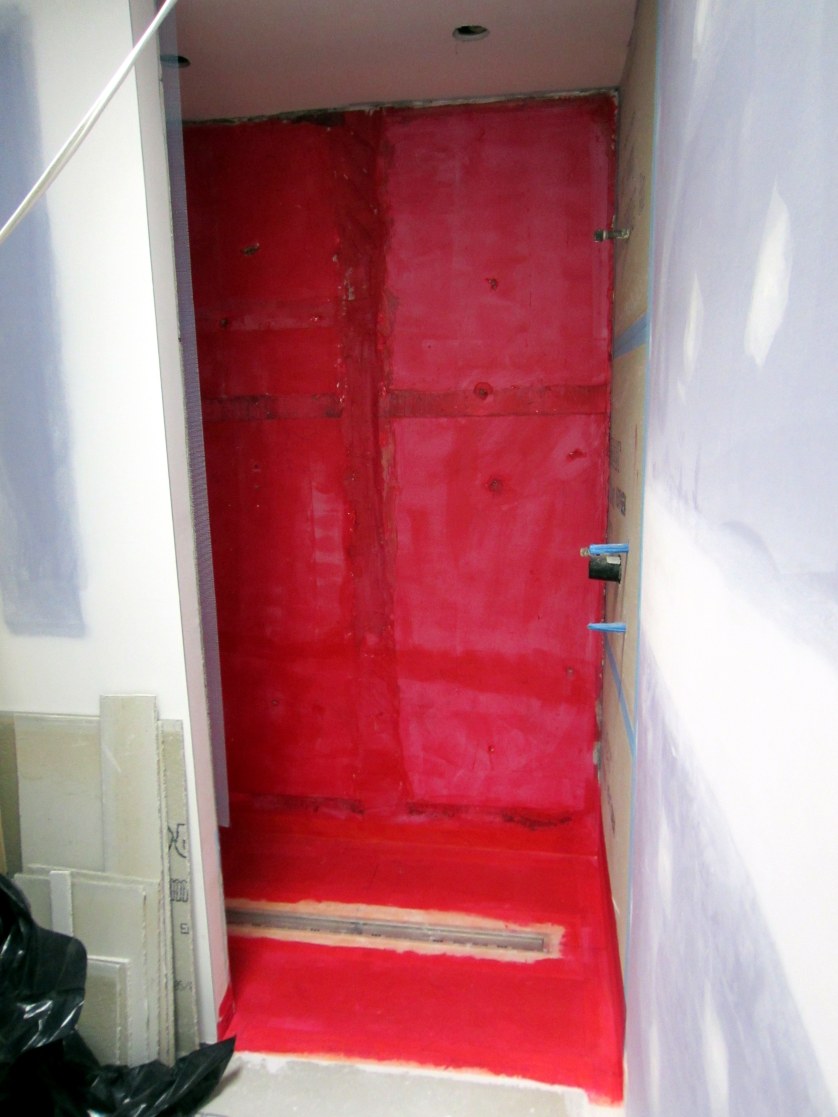 In the meantime, crates of tile have arrived, and are now stowed in the basement:

Here’s the tile for the master bath – Crema Ella. Lis wanted a spa feel, with tan stone. We considered travertine (a limestone), but learned that the porous nature required a lot of upkeep and would also show where epoxy or other filler had been added to fill the holes that naturally occur. The Crema Ella is a marble with a really homogenous appearance and very little veining. We totally dig it.

We’ve got a crapload of Crema Ella, eh?

Upstairs in the master bath (all lit by the skylight, which is exceeding our expectations), we met with Natalie, our architect, Mario the CG’s tiler, and Dave to review joint size and grout color. You can see the little grout samples placed along the side of the tiles, as well as the Crayola-style box of them over to the left.

The Crema Ella is at bottom right. The other two are the floor and wall tile for the guest bath, which will have a turn-of-the-century feel to it, including the fixtures (I think we’re going to market it later as part of the Wolfe Streete Sanitarium of Olde Towne). The dark marble is Blu Masaccio and the white marble is pretty standard Goia Venatino. Part of the grout discussion was whether we wanted to highlight the pattern in the guest room (using dark gray grout) or highlight the stone (using a very light gray grout).

During the discussions, and based on the decision to do very tight joints in the master bath, the tile design was changed again, essentially to the original design of even courses throughout. The final(?) plan appears below:

In the guest bath, we talked over some additional ways to bring visual interest to the space, and have decided to do several courses up to the vanity height with the 16″ x16″ stone, then a 4″ belt course, then the 8″ x16″ brick pattern, as shown below.

Stay tuned – it’s all conceptual at this point. The GC now needs to execute on the final design.